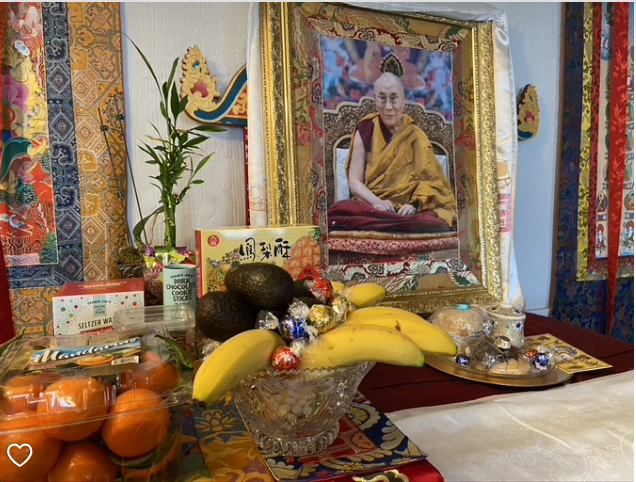 Donate Now-- It is still the month of Saka Dawa. We are so close to our goal!

Current total is the amount below plus $4000! (Amount given off-line)

We are in the month of Saka Dawa and if you haven't had the opportunity to join the Saka Dawa campaign there is still time!

Tse Chen Ling Center opened its doors on Saka Dawa, June 8, 1990 with the blessings of Lama Zopa Rinpoche and its name given by His Holiness the Dalai Lama in Dharamsala, India, earlier that year. About fifteen students joined us for Lama Chopa Tsog with Lati Rinpoche.

This year, Saka Dawa Duchen (the anniversary of Buddha’s birth, death and paranirvana) is commemorated on Wednesday, May 26 when we will celebrate over thirty years of sharing a legacy of extraordinary teachings at Tse Chen Ling.

Since 1990 we've offered teachings in the tradition of Lama Tsongkhapa to all levels of students, hosting visiting Lamas and Western teachers. We've been blessed with amazing resident teachers like Geshe Ngawang Dakpa, now retired, and Gyumed Khensur Rinpoche Lobsang Jampa who became our part-time Resident Teacher in 2019.

We need your help to sustain Tse Chen Ling-- to enable the Center to reopen and to continue this caliber of programming, both online and in-person.

So this Saka Dawa, a day when the benefits of positive actions are multiplied 100 million times, step up and create incredible merit with a donation to Tse Chen Ling.

Please help us meet our goal of $10,000 as we have had unexpected building expenses, increases for online production costs, and find it essential to actively support our Director and Spiritual Program Coordinator positions. Please give generously now so that we can re-open Tse Chen Ling Center at the most optimum time, maintain a fantastic online program, and continue to flourish for the benefit of all.